Join us for an evening of high jinks, laughter and japes as the highly acclaimed Lawrence Mooney, Katie Burch and Tim Siegert take to the Barlow stage!

The ever-funny Tom Siegert captain’s the evening’s ship of humour as our MC, setting the stage for Katie and Lawrence.

Katie Burch’s uncompromising original style takes from her life as a mum and wife with an edge of wickedness that will leave you laughing long after the night is over. While the award-winning Lawrence Mooney headlines the night fresh off his successful run at Melbourne’s Comedy Festival.

Live comedy at its absolute best! 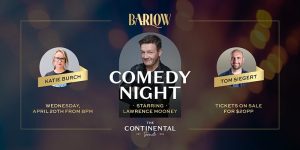